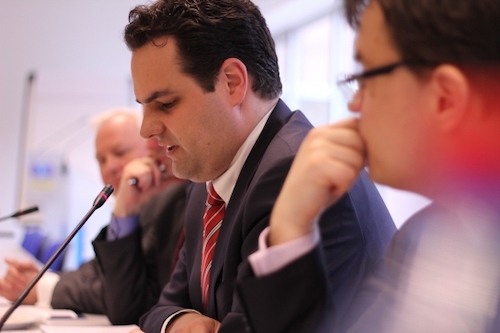 Dr Blum is working the in the field of dection, analytical identification, countermeasures, decontamination and mitigation of effects of chemical and biological warfare agents with more than 20 years experience.

From September 2012 to September 2019 he worked in the laboratory of the Organisation for the Prohibition of chemical Weapons (OPCW). From July 2017 to September 2019 he was the Head of the OPCW Laboratory. His responsibilities included line management for lab staff, general guidance for the labs research activities, the conduct of the OPCW’s environmental and biomedical Proficiency Testing programs, the lab’s quality system and accreditation under ISO 17025 and ISO 17043, the initial planning phase of the new laboratory replacement building (Center for Chemistry and Technology) and in 2018 he was team leader for the OPCW’s mission to Salisbury and Amesbury following the assassination attempt on Sergej Skripal and his daughter Yulia.

From 2010 to 2012 he was a Director’s Fellow at Los Alamos National Laboratory (NM, USA) continuing previous work on enzymes based systems for CW detoxification (in-vivo and ex-vivo).

From 2006 to 2010 (after completing his Ph.D. thesis on a nerve agent degrading enzyme) he conducted independent contract R&D work in the area of CBRN defense. Main work was carried out at the Bundeswehr Institute of Pharmacology and Toxicology of the Bundeswehr Medical Corps on the development of a micro-emulsion based enzymatic skin decontaminant.

Since 1 November 2020 Dr Blum is a Visiting Fellow at the Centre for Science and Security Studies (CSSS), Department of War Studies, King’s College, London.

After obtaining his German high school degree in Hamburg and (at the same time) completing professional training as a lab technician (Chemisch Technischer Assistent, CTA) in a special program of his school, he enrolled in chemistry at the Technical University of Braunschweig. He spent a semester at the University of Birmingham (UK) and conducted part of his diploma thesis research in synthetic organic chemistry at the Humboldt University in Berlin. After graduation with the German diploma degree (Diplomchemiker – M.Sc. equivalent) he completed his doctoral degree in biochemistry (Dr. phil. nat. – Ph.D.) in the group of Prof. Heinz Rüterjans at the Institute for Biophysical Chemistry at the Goethe University in Frankfurt. The topic of his work was the nerve agent degrading enzyme diisopropyl fluorophosphatase (DFPase). During this project he was a regular guest at the German Armed Forces Scientific Institute for Protection Technologies / NBC-Protection (WIS) in Munster and member of NATO’s Biotechnology Team of Experts (ToE) under the auspices of the Joint Capability Group on CBRN Defence

In 2008 he finished an additional a masters degree (M.A.) in “War in the modern world” at the department of War Studies – King’s College London. In his thesis he looked at US nuclear modernization and its impact on the Comprehensive Nuclear-Test-Ban-Treaty.

He is also a member of the Freundeskreis Ausbildung ausländischer Offiziere an der Führungsakademie der Bundeswehr e.V. (Foreign Officer Training Support Fellowship at the Bundeswehr Command and Staff College).

In 2012 participation in the Young Leader’s Program of the American Council on German (ACG). During his undergraduate studies he received a scholarship by the Konrad Adenauer Foundation.

Dr. Blum is the author of numerous peer reviewed publications, book and book chapters in the field of CBRN defense.